From the author of the best-selling The Man Who Knew Infinity, comes an unprecedented look at the traditional master-apprentice relationship alive today in modern science. Robert Kanigel takes us into the heady world of a remarkable group of scientists working at the National Institutes of Health and the Johns Hopkins University: a dynasty of American researchers who for more than forty years have made Nobel Prize- and Lasker Award-winning breakthroughs in biomedical science. He brilliantly captures the drama of fine minds and explosive personalities at work -- whether Bernard Brodie and Julius Axelrod discovering a new wonder drug called Tylenol or Solomon Snyder and Candace Pert unlocking the chemical secrets of the brain. And as we watch ideas debated, experiments working and failing, careers and relationships tested, and professional honors lost and won, we see close up all that is so deeply human in the practice of science. In a new epilogue to this edition, Kanigel brings us up-to-date on the lives and careers of these unforgettable personalities. 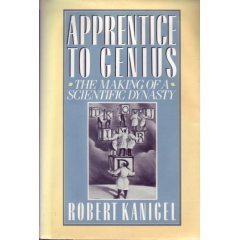 "A brilliantly written book, and a new kind of book, about what, at the very highest level, can be taught; not information, but investigative style. No one interested in science or quick-cut melodrama should miss Apprentice to Genius. -- Hugh Kenner

"Carries the reader behind the scenes to watch the almost magical cascade of ideas and experiments that are laying the human mind bare -- and which, when added together, probably sum up to the greatest discovery of our century." -- Jon Franklin, two-time Pulitzer Prize winner in science writing

-- From the dustjacket of the original Macmillan hardcover edition, 1986 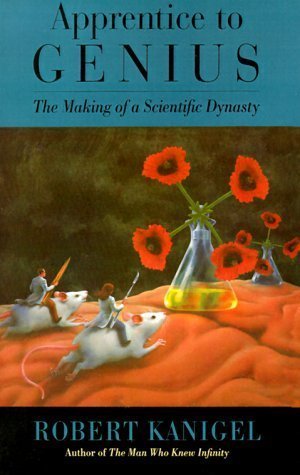 "Some of the most lucid science writing I have read anywhere...A fascinating story, and Kanigel has told it skillfully." -- Washington Post

"A fresh, absorbing view of the human side of elite science." -- Publishers Weekly

"Robert Kanigel does something few science writers have dared to do -- show scientists as the egotistical, bickering, jealous, competitive, political, i.e. human, creatures they are." -- Baltimore Evening Sun

"Rare insight into the artistry of scientific discovery." -- Philadelphia Inquirer

"Like a good novel, Apprentice to Genius reveals more about people and how the world works than most psychology and sociology does...A serious and illuminating book." -- Los Angeles Times

A "fascinating book, which reads like a combination of startling expose, spy novel, and who's who in pharmacological research." -- Chemical and Engineering News

"A Joseph's coat of variegated threads, a beguiling combination of sociological and scientific scholarship, straight reporting and titillating voyeurism." -- Isis

"Although it is aimed at lay readers, professionals will enjoy Apprentice to Genius. Kanigel describes key experiments without the hype and oversimplification of many popular writers (or the turgidity of medical journals. I learned a good deal. At the same time, he has done his journalistic homework: read everything, interviewed everyone, asked the right questions, and kept a sense of proportion. His researchers are vividly sketched, warts and all, but he seems fair-minded. Quarrels receive their due and no more. The book rings true." -- Journal of the American Medical Association