"We all think we know a fake when we see it, but Robert Kanigel shows us in Faux Real that there's far more to the real -- and the fake -- than meets the eye. Partly a history of inventors and entrepreneurs, partly an appreciation of endlessly shifting material textures and surfaces, and partly a philosophical exploration of the real and the fake. Kanigel's fascinating book looks at leather and its many imitations -- from Fabrikoid, Naugahyde and Du Pont's Corfam shoe material to the Ultrasuede of today. His conversational style entertains and informs as he explores economic and aesthetic motives for imitation leather, ingenious processes for making real and artificial leathers, and satisfactions and disappointments of both the real and the fake. Faux Real successfully conveys the complexity and depth of materials, both rare and ordinary, whose varied surfaces hide as much as they reveal."
-- Jeffrey L. Meikle, professor of American Studies and Art History, University of Texas at Austin and author of American Plastic: A Cultural History, and Design in the USA

"Faux Real is witty, fascinating, well researched, and raises all kinds of important questions about the real versus the artificial, why this distinction should matter, and how we navigate our lives in an increasingly fabricated and simulated world."
-- Alan Lightman, author of Einstein's Dreams

"Leather has always fascinated us. But because it’s expensive and hard to work with, chemists and engineers have long tried to create new materials that would wear as well, feel as good, and last as long as the real thing. In Faux Real, Robert Kanigel tells the story of leather and the ongoing quest to simulate it.

As early as the 14th century, fabric was treated with special oils to make it resemble leather. In the 1870s came Leatherette, a new bookbinding material. The 20th century has given us Fabrikoid, Naugahyde, Corfam, and Ultrasuede. Each promised to replace leather and the laborious tanning process by which animal hides were turned into finished products. How did they fare in the marketplace? Some better than others—and genuine leather is still sought after today.

In addition to detailing the tanning process, Kanigel chronicles the steps taken by companies such as Du Pont (creator of Corfam) to commandeer the leather market. Introduced to the public in 1963, Corfam was advertised as “breathing” like real leather. While it bore the imprint of leather’s distinctive grain, it was actually a distinctive creation spun from polyester and polyurethane. But it flopped for several reasons—cost of manufacture, the competing popularity of vinyl, and complaints about the uncomfortable shoes made from the stuff.

Other materials have fared better. By 1983, 6,800 miles of microfiber faux leather were being produced in Japan every year, of which the greatest fraction was Ultrasuede, which is 60 percent polyester. The varieties of fake leather on the market today are truly mind-boggling: products with names like “Glaze,” “Vintage,” and “Symphony Suede” all advertise their alleged leathery qualities. This sea of faux-ness has taken its toll in the U.S.: the American leather industry is moribund. And as if to underscore the triumph of illusion over reality, one research study has found that people prefer the smell of artificial leather—so that leather seats in cars are now impregnated with the smell of its simulated counterpart.

Faux Real offers insightful perspectives on the meaning of authenticity in an ever-more-synthetic world."

What makes genuine leather genuine? What makes real things… real? In an age of virtual reality, veneers, synthetics, plastics, fakes, and knockoffs, it’s hard to know.
Over the centuries, men and women have devoted enormous energy to making fake things seem real. As early as the 14th century, fabric was treated with special oils to make it resemble leather. In the 1870s came Leatherette, a new bookbinding material. The 20th century has given us Fabrikoid, Naugahyde, Corfam, and Ultrasuede. Each claims to transcend leather’s limitations, to do better than nature itself—or at least to convince consumers that it has.

Perhaps more than any other natural material, leather stands for the authentic and the genuine; GENUINELEATHER, like a single German word, is how we think of it. Its animal roots etched in its pores and in the swirls of its grain, leather serves as cultural shorthand for the virtues of the real over the synthetic, the original over the copy, the luxurious over the shoddy and second-rate.

From formica, vinyl siding, and particle board to cubic zirconium, knockoff designer bags, and genetically altered foods, inspired fakes of every description fly the polyester pennant of a brave new man-made world. Each represents an often passionate journey of scientific, technical, and entrepreneurial innovation. Faux Real explores this borderland of the almost-real, the ersatz, and the fake, illuminating a centuries-old culture war between the authentic and the imitative.

"It is curious that in the age of digital communications we have two of the best books on leather now available. Just coming out on June 1st is Faux Real: Genuine Leather and 200 Years of Inspired Fakes by Robert Kanigel. Corium club members who visited the centenary American Leather Chemists Conference in St Louis may well have met Robert Kanigel who has the curious title of Professor of Science Writing at MIT in Boston.

"That gives the key to this fascinating book. Robert Kanigel has not spent his life in the leather industry nor is he a leather chemist. Yet he is able to discuss technical matters in an intelligible way and bridge that gulf we so often find between dry technical studies and the romantic novel. Instead of doing a chronology of the history of the industry his viewpoint is one of examining the many synthetic challenges to leather over the last two hundred years and interrogating the technical and marketing issues that have kept leather secure. As such this is a book which tanners will find quite irresistible. Visits to plants and locations around the world are discussed in detail as are discussions with many senior industry figures, a lot of whom are alumni or have close links with Northampton. Here you will find the author musing about Tony Covington's comments on the complexity of tanning and Richard Daniel's Back to Basics. So readers will find a book that is hard to put down. It discusses aspects of our industry and how it has changed from an entirely unsuspected viewpoint and meanders through the familiar people, places and technologies that we understand so well.

"We have some new terms to consider – 'materialophilia,' for those who love particular materials, the 'chrome tanning awareness period' from 1884 to 1900 when chrome tanning failed to make real inroads into the traditional vegetable tanning methods, and 'essence-of-hide,' that 'purified, almost sanitized collagen network, largely hairless, fatless and without extraneous proteins.'

"This is a rare work not to be missed."

(The other book to which Mr. Redwood refers is “Conservation of Leather” by Marion Kite and Roy Thomson, published in 2006.)

I wish to express my thanks to the MIT School of Humanities, Arts, and Social Sciences, and to the Alfred P. Sloan Foundation's Public Understanding of Science and Technology Program, for their generous support of the research and writing of Faux Real.

"Which would you rather touch? Oak or formica? Silk or polyester? Brick or plastic? Vinyl or leather? Assuming you went for the real over the fake, what is it about 'real things' that makes them more appealing? And what is it about our human quest for progress that compels us to keep inventing materials that, with varying degrees of success, imitate the qualities of real things? Robert Kanigel answers these and many other questions relating to the history and qualities of materials in a book that ranges between industrial history and popular culture studies. The focus is, as the title suggests, on leather, but Kanigel stretches the hide to cover an even broader study of consumer habits and cultural imperatives...[He] has written Faux Real with the passionate curiosity of a leather aficionado...[and made of it] a clear and coherent narrative." -- Technology and Culture


"A book to fall in love with...Provides fascinating insight into the world of leather...Not a list of formulae or a time-line of events running from ancient Babylon to Jimmy Choo, but a book which takes leather apart diagnostically and gracefully...All those involved in leather in whatever role will enjoy this book." -- World Leather [U.K.]


"Delightful prose...While reading I could see the worker on the beam and hear the hides sloshing in the wood-sided vats....[Kanigel is] the star performer here, the continuing presence, the authority with the vital prose and lifetime expertise, and that hard-to-fake quality, a true love for the subject." -- Chemical Heritage


"A colorful tour of everything leather...Kanigel's research took him around the world, to shoe and vinyl factories, to processing plants where hides from recently slaughtered animals are prepared for the next production stage, and to Italian tanneries. He stopped by the 22nd annual New England Fetish Fair and Fleamarket at the Park Plaza Hotel in Boston and visited the Smithsonian Institution in Washington, DC, where he was allowed to view a pair of leather boots made out of human skin." -- Technology Review


"A sound researcher and an engaging writer...Kanigel brings drama to Du Pont's decade-long search for a synthetic leather; the resulting Corfam -- hailed as being as revolutionary as nylon -- was a failure as infamous as the Edsel...Kanigel intelligently takes time to address the philosophical question of the importance of faux versus real." -- Publishers Weekly


"Kanigel...provides more than a mere history of leather-making and the quest for an artificial replacement. He also delves into what we mean when we speak of real and natural...The technical prose is precise and engaging; recommended for academic libraries as well as for the science or business departments of large public libraries." -- Library Journal


The author brings "a new and frankly very refreshing perspective to our rather insular business...A thoughtful view from the side by someone who has grasped an amazing understanding of the leather industry in a short time...Faux Real is the right book for all tanners to read, enjoy and ponder on the true value of leather." -- Journal of the Society of Leather Technologists and Chemists [U.K.]


"Kanigel's book is an easy and pleasurable read...He is able to make even the chemical structure of collagen sound fascinating...A tribute to leather's physical and tactile properties and to humankind's ingenuity and persistence in attempting to imitate them." -- Design and Culture 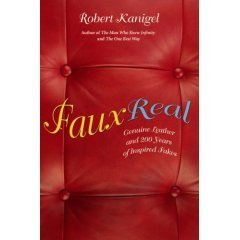